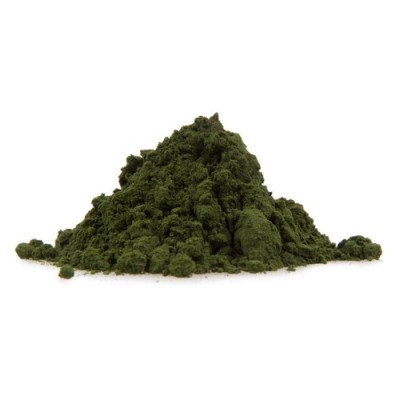 Just pure, certified organic/raw freshwater spirulina cultivated in Taiwan. This powerful green-blue algae is said to be one of the most nutrient-dense foods on the planet! Adding it to your diet is a great way to boost your intake of powerful antioxidants, chlorophyll, and many trace minerals in your diet.

Studies have shown that the nutrients and various compounds found in spirulina have significant health benefits.

Here are a few nutritional highlights and studies that stand out:

These contribute to Spirulina's strong anti-inflammatory properties. GLA (Gama Linoleic Acid) is particularly powerful and not found in significant amounts in many foods.

What GLA does specifically:

Spirulina contains very high levels of the antioxidant phycocyanin which has shown to boost the immune system, decrease inflammation, and fight cancerous tumors. It scores 24,000 on the ORAC (Oxygen Radical Absorbance Capacity) chart, ranking it amongst the top 20 foods on the planet in this department.

Acts as a Heavy Metal Binder

The high levels of chlorophyll are likely the reason spirulina does such a good job at binding with heavy metals in the body. This study had some astonishing results that decreased levels of arsenic by 50% in the body when combined with the mineral zinc.

In this study, diabetics were given 2 grams of spirulina daily for 60 days. At the end of the study, all participants showed significant reductions in blood sugar levels.

Multiple studies have shown that spirulina decreases inflammation in the body thanks to high amounts of phycocyanin. This compound is what gives spirulina its intense green/blue hue.

This study conducted in November of 2007 showed promising 'hypolipemic' effects. Participants that were given 4.5 grams of spirulina powder per day not only had decreased blood pressure but also improvement in a number of blood plasma markers.

The study concluded the following:

"We propose that because of these pharmacological properties, Spirulina could be used as a dietary supplement on dyslipidemic and hypertensive patients."

What is it Spirulina?

How much should I consume daily?

Anywhere from 1-8 grams (or higher), depending on your goals.

Is it a good source of Protein?

What nutrients are found in spirulina?

What is the difference between spirulina and chlorella?

They are both nutrition algae but are structurally different. Spirulina is more nutrient-dense but contains lower amounts of chloryphyll.