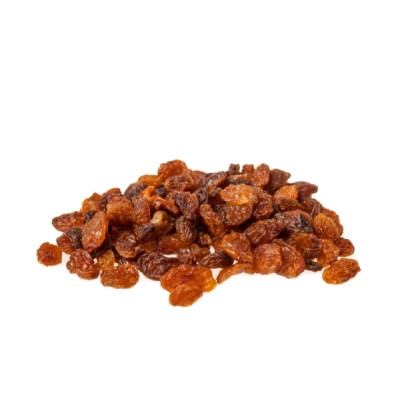 Sultana raisins, also known as “golden raisins”, are loaded with vitamins, minerals, and antioxidants. They’re used in many cuisines throughout the world for both sweet and savoury dishes.

These pale golden brown raisins are soft, moist, and juicy with a sweet and slightly fragrant flavour. Their plump texture, delicious taste, and ability to absorb other flavours make them incredibly versatile.

Sultana raisins are a great addition to many recipes such as rice dishes, couscous, stews and salad – or they can simply be enjoyed on their own as a tasty snack. They’re also a fantastic way to sweeten oatmeal or baked goods such as muffins and cookies.

Sultana raisins are made from a particular type of green seedless grape called the Thompson Seedless variety. A drying process takes place to shrink the grapes into small, nutrient-dense dried fruit.

Studies have shown that due to their high nutrient content, sultanas provide plenty of health benefits such as improving digestive health and potentially reducing the risk of several chronic diseases.

Our 100% organic sultana raisins will perfectly complement many recipes and are an excellent way to add plenty of antioxidants, vitamins and minerals to your diet.

Why not try these sultana raisins alongside other nutritious foods such as nuts, seeds or yogurt!

Sultanas are highly nutritious due to the drying process of the grapes which results in water content being reduced from 80% to 15%.

Interestingly, evidence reveals that there is up to four times the amount of fiber, vitamins, and minerals in dried grapes than in fresh grapes.

Just one ounce (28g) of sultana raisins contains 2g of fiber, which is 8% of your daily requirement.

Moreover, these golden raisins are rich in health-promoting antioxidants.

There are approximately 106 calories and 21 grams of sugar per 28g serving.

Their high content of powerful antioxidants and fiber contributes to a number of health benefits.

Antioxidants help to protect cells from damage caused by free radicals and oxidative stress, which can lead to inflammation and several illnesses such as cancer.

Research has also shown that a diet high in fiber-rich fruit and vegetables may help to prevent heart disease, diabetes, and high blood pressure.

A: Sultana raisins are made from a type of green seedless grape called the Thompson Seedless variety. A drying process occurs to shrink the grapes into small nutrient-dense dried fruit called sultanas.

Q: What is the difference between sultanas, raisins, and currants?

A: Aside from sultana raisins, there are two other types of dried grapes – raisins and currants.

The term “raisin” in the US is used for both sultanas and raisins. To avoid confusion, sultanas are normally called “golden raisins” or “sultana raisins”.

Raisins tend to be the largest of the three types of dried grapes with a dark colour, soft texture, and sweet flavour. Currants have an intense, sweet, and tangy flavour, and are smaller in size than raisins.

Q. What nutrients are sultanas rich in?

A: Sultana raisins are packed with plenty of vitamins, minerals and antioxidants. They’re also a great source of fiber containing approximately 2g per 28g serving, which is 8% of your daily requirement.